Why You Need Neural Networks to Advance Product Customer Experience

According to Babbel, a language app, Mandarin Chinese is the most challenging language to learn for English speakers. This data is fascinating because most non-English speakers would argue that English is the most challenging language to learn! Sid Efromovich described how exactly language differs from one to another. At times, we see a word with letters we know (in the video, this would be Māo) and pronounce it as we would in English. But then there are words like 水 that you cannot pronounce in English. Benny Lewis, a polyglot, emphasized how there is no language gene or talent. Everyone can learn a foreign language.

MIT mentioned in their news that "learning a language is the task of syntactic and semantic parsers." Their researchers built a parser that learns languages just like a child would do. The parser observed captioned videos with no other information and then associated words with the observed situation. This method is not uncommon. The author Anchee Min learned English from watching Sesame Street when she first migrated to the United States.

The advantages of neural networks

According to Smarsheet, neural networks are especially useful in this era of big data. They make sense of the ambiguous, contradictory, and incomplete data we produce (this ability is called fuzzy logic).

A Youtube channel called 3Blue1Brown brilliantly described neural networks in plain English, with an example of computer image recognition. Specifically, defining a picture as number 0 to 9. A neural network breaks the task down into several layers. The idea is to design a filter to identify an object from pixels to that in strokes, and later is known in parts, and finally, what the picture might be in numbers.

The key here is that anything that needs learning can leverage neural networks to improve the customer experience. Like a human brain, neural networks grow and expand knowledge by continuously learning from the information it grasps and their mistakes. The study of neural networks benefits us, the users, because it will help automate activities. Using 3Blue1Brown's example, imagine if computers can 'read' scribbles - in this case, number scribbles. Then, we can scan a handwritten document and immediately get the Word Document transcription. This feature fastens the process of note-taking and productivity.

Neural networks applications around us

Google Translate is one of the many applications of neural networks. Your business can utilize apps to connect with customers around the world. McKinsey also mentioned several applications of neural networks in An Executive Guide to AI. It can generate captions for images, detect defective products on a production line from images, generate analyst reports for securities traders, and more. Meanwhile, IBM Watson offers smart insights that predict and prevent fraud.

Other businesses, such as Tesla and Boston Dynamics, enhance their products using neural networks. Tesla offers full self-driving mode on their cars with forward-facing radar and 360-degree cameras. Boston Dynamics created robots that can carry and handle stuff, for example, in warehouse settings.

We can categorize apps into two types, which are customer-facing and employee-facing apps. A good would be the FICO Falcon platform for fraud detection. The program detects fraudulent transactions and alerts both customers and employees. A scenario would be numerous attempts to log in through a banking website. This activity turns out to be fraudulent, mainly because the location is new or the user cannot answer security questions. The attempts are repetitive within a short period (nanoseconds). The Falcon would intervene and block the user based on the parameters. The Customer-facing app would alert the customer of suspicious activity. Meanwhile, the employee-facing app would alert the employee and inform the possible type of attacks it experienced. Then, the employee responds based on analytics insight.

Another example of a customer-facing app is Tesla's image recognition software. Tesla cars are equipped with 360-degree cameras and forward-facing radars with autopilot capabilities. If something goes wrong, the customer will inform the manufacturer. Should that be a software problem, the manufacturer would upgrade the system.

Customer-facing apps improve customer service and leverage how customers can use businesses' products and services.

Meanwhile, an employee-facing app's example would be face recognition. Some Hollywood movies, like "Eye in the Sky," depict how the military could identify and fight the enemy using drones and image recognition. Similarly, facial recognition is used for security reasons. Amazon Rekognition can locate texts, faces, and movements. Police cars can detect forged or expired license plates through image recognition.

Where are you in your business stage?

Tesla didn't start as an autonomous car manufacturer. Instead, they launched their first product, Roadster, as an electric vehicle run by software, like smartphones. To use neural networks, you can start small and gradually leverage the neural networks in your business.

There are three stages of business growth, namely "Early-stage," "Mature," and "Growth." When you're in the Launch stage, you should build the IT infrastructure and utilize algorithms to perform repetitive tasks. For example, you can use neural networks to learn how to translate languages, recognize images, and categorize transactions. As you start, use Google open API tools such as Google Translate. Keep in mind that you need to start somewhere with Artificial Intelligence.

Then, your business grows to the Mature stage. Here, you enhance your products and services to cater to customer needs. Netflix uses personalized recommendations, just like Amazon does. IBM published a white paper on their AI technology that helps doctors identify breast cancers. With neural networks, you can train the machines to learn. But you will also need a lot of data. The Mature stage suits this requirement because you already have plenty of customers and their behavioral data by then.

Finally, Growth is where you expand your business to other sectors. You may want to focus on a specific customer segment and tailor solutions that match their lifestyles. For example, if you target Gen Z, you might want to consider Tiktok social media to reach them. At this stage, you can experiment with many different neural networks. Google started with image recognition of cats, and now, it has an app called Voice Search that translates speech to text for searches. From electric vehicles to now, Tesla began to have real-time image recognition with 360-degree cameras and forward-facing radars.

Remember that if you don't grow, others will take the chance, and you will lose in the competition. Nokia and Blackberry are classic examples of how ignorance plays in decision-making. You don't want your business to stop growing. Therefore, you have to start implementing AI technology little by little.

There is a possibility that neural networks can uncover the qualitative part of consumer behavior. The current online tools usually predict behavior based on quantitative data: we can predict the likelihood of a website visitor becoming a potential sales lead using historical or industry benchmark data. Another example would be Google Keyword Planner, where we can have a rough guess on how our blog post will thrive based on the volume of monthly searches and competition regarding the keywords.

On the other hand, neural networks may predict beyond the numbers given. For example, it can predict the likelihood of a user supporting a social campaign based on their behavior. If a person recently buys a gun, he or she might be a Republican, and thus, the user has preferences in supporting social causes. We can use neural networks to offer products and services related to the customer, even when they haven't yet realized the need.

Neural networks address customers' pain points and introduce products and services during the 'Awareness' stage of a customer's journey. 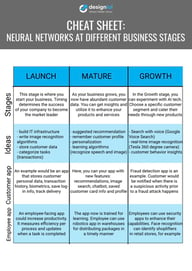 Perhaps the first thing you should know is that technology investment is beneficial for many business owners. McKinsey mentioned that neural networks could create a value of US$3.5 trillion to US$5.8 trillion annually.

In a sense, artificial intelligence, such as neural networks, will be needed in the future. The infrastructure to utilize it will also become more accessible, cheaper, and more advanced. Take Microsoft Azure, for instance. It is offering free account access as of June 2020. You can also check out Google Cloud, IBM Cloud Pak & Data, and Amazon AWS.

Neural networks are about training machines to learn and utilize them; you can start small with automation. Further down the road, you can enhance your customer experience with learning algorithms.

At Designial, we give impact-driven results for your company. With fixed-price solutions, we offer Digital Transformation, UX Research, mobile app development, and other services. Contact us for more information.

Editor's note: This post was originally published in October 2020 and has been updated for comprehensiveness.

Everything You Need to Know about Artificial Intelligence

Artificial Intelligence delivers delightful customer experience. Are you ready to elevate your business? Designial can help you.

Google, Apple, Uber all use algorithms to improve their customer’s experience while interacting with apps drastically. Are you using them? We can...

How To Leverage Customer Experience Management To Increase Revenue